A month of Spooooky titles!

I absolutely love the month of October.  Spookiness is the name of the game this month, and my book posts will be centered around this theme for the next 5 Mondays!  You're welcome ;) 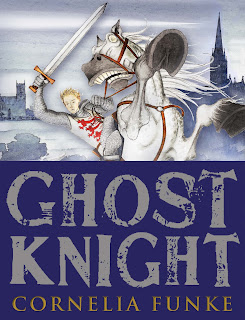 Growing up I loved a good ghost story.  Okay, I still love them!  There is just something about being spooked, and believing in what may or may not be real.  So when I saw Funke's latest title, Ghost Knight, I was immediately drawn to it.

Jon is a typical adolescent boy who at the start of the school year finds himself shipped off to a boarding school.  Jon suspects his mother's boyfriend, which he awesomely calls "The Beard," has a part in his sending off.  Once settled at school Jon hears some strange sounds outside during the night.  Daring a peek outside, Jon finds himself haunted by spirit knights hanging out below his window.  As all good spirits should be, they are bloody, fearsome and apparently after Jon!  Jon ends up learning of the family connection he has to the spirits, finds help from the living as well as from the spirit of Sir William Longspee, a real person in history!  The illustrations add great visuals throughout. 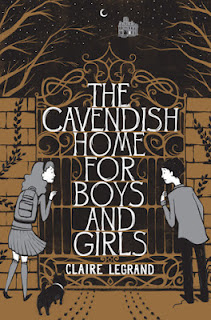 Here we have a very unique story.  Victoria is top of her class, organized to a fault, rigid and unsure of how to have a loving relationship.  Things begin getting weird in her quaint town.  First we hear and see and feel the bugs that creep and crawl in the strangest places.  Then we notice the adults have wolfish grins at times.  And there's that chilling breeze that sweeps through a room.  And the kids.  Why are some kids missing, and why don't their families seem alarmed?  We, the reader, and Victoria are trying to figure this all out together.
Things get real bad when Victoria's one friend-even-though-she-won't-admit-it, Lawrence, disappears.  His parents say he is visiting a relative.  But Victoria doesn't buy it.  And neither do we.  Something strange is afoot, and the root of it might be at the Cavendish Home for Boys and Girls.  Pun intended, if you've read the book you caught it!

It's creepy and twisting and dark, the perfect October read.  What is wicked of Claire Legrand is the ending.  The ending is just wicked of her.

The illustrations are of an interesting style, however they give the story a cartoonish feel that almost makes light of the darkness that is there.  Plus, in a scene at the end Victoria was running from someone  with something in her arms, and neither were portrayed as they were in the text.  That kind of thing can irk me, but I liked the book enough not to dwell on it.